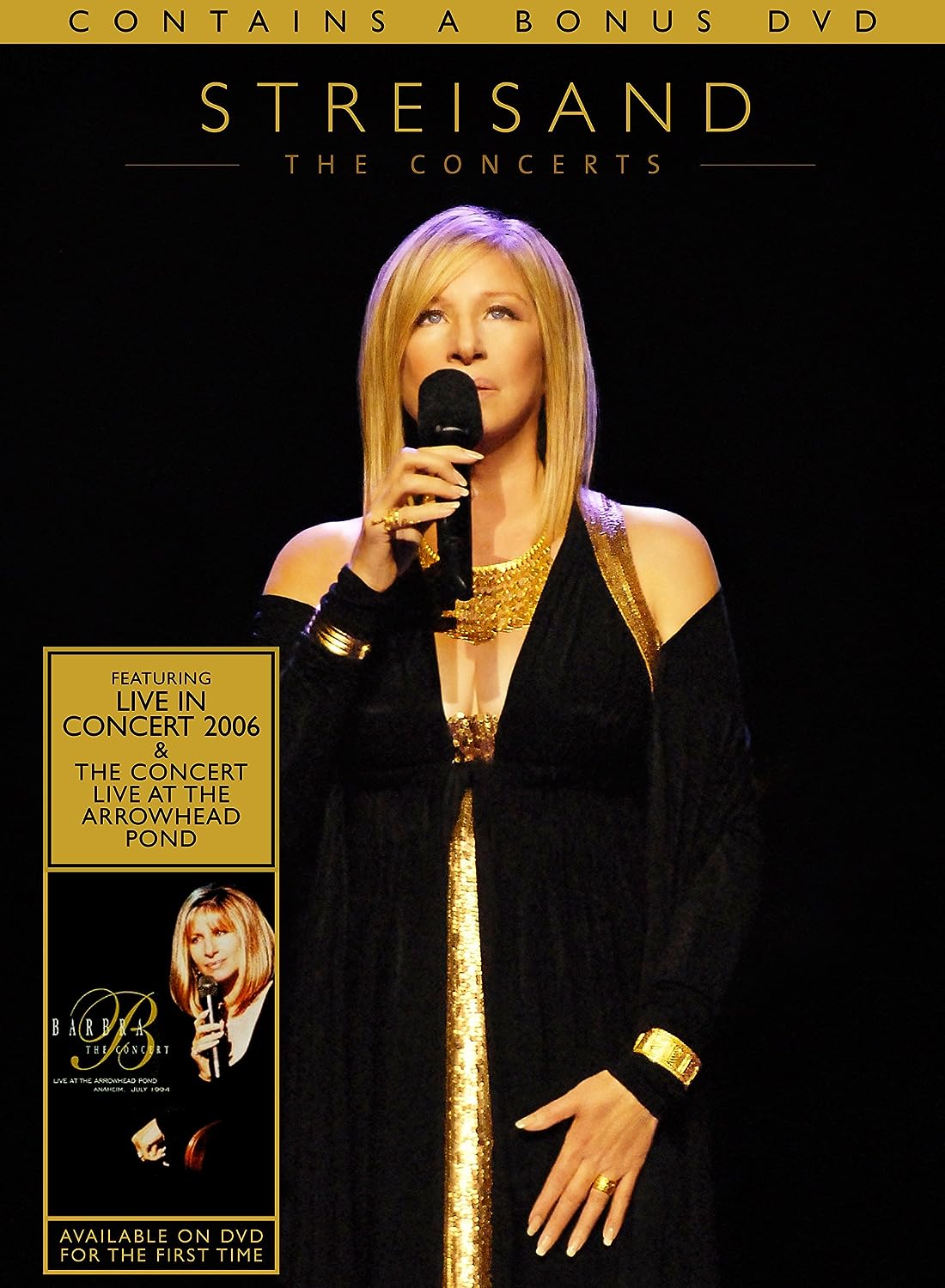 Barbra Streisand is world renowned for thrilling audiences with her magical performances, her supreme vocal talent and setting box office records. Now fans can get front row seats to the best of Barbra Streisand captured in THE CONCERTS, a new 3-disc DVD showcasing some of her most memorable concerts, special exclusives including 17 songs never-before released on DVD and behind-the-scenes moments with one of the most beloved artists of all time.

The 3-Disc DVD set offers fans an all access pass to two of her most memorable concerts in their entirety. DISC ONE captures the record-breaking, 2006 North American tour from the sold-out Ft. Lauderdale show, with special guest multi-platinum recording artist, IL DIVO. Fans will get a chance to experience 10 songs never-before-seen on DVD, including "Unusual Way," "A Cockeyed Optimist" and "My Shining Hour," all of which are the first time Streisand has ever performed them either in the studio or live. Bonus features include five additional songs as well as interviews with the behind-the-scenes team who create and execute this musical and visually explosive experience.

DISC TWO allows fans to experience the unforgettable 1994 concert Live at Arrowhead Pond in Anaheim, CA that documents the magic of her first concert tour in 27 years. For the first time on DVD, this special concert includes the first-ever live performance of "Lazy Afternoon" and the "Yentl Medley."

DISC THREE presents "Putting It Together: The Making of the Broadway Album." With video and vintage performance footage from the `60s and `70s never before seen on DVD as Bonus Features, the disc includes video performances from Streisand's Emmy award winning television specials including "People" from My Name Is Barbra 1965 , "Yesterdays" from Color Me Barbra 1966, "I'm Always Chasing Rainbows" from The Belle of 14th Street 1967, "Silent Night (Sleep In Heavenly Peace) from A Happening In Central Park 1968 and "Cryin' Time (with Ray Charles)" from Barbra Streisand...And Other Musical Instruments 1973. Disc #3 is jam-packed with exclusive, behind-the-scenes footage including the making of the award winning, number #1 album The Broadway Album and video clips from her childhood, extensive one-on-one interviews and a montage of the numerous awards she's received throughout the years. Streisand The Concerts is an extraordinary collection of the very best moments and highlights from Barbra Streisand's legendary career and includes more than 60 songs spanning classics such as "Funny Girl," "The Way We Were," and "People," as well as never before performed "The Music of the Night," and "Somewhere" with Il Divo.

Barbra Streisand is the music industry's #1 best-selling female artist with 50 Gold, 30 Platinum and 13 Multi-Platinum albums to her credit. She is second in the all-time charts, ahead of The Beatles and The Rolling Stones, exceeded only by Elvis. She continues to be the highest-selling female recording artist ever. Streisand remains the only artist to receive Oscar, Tony, Emmy, Grammy, Golden Globe, Cable Ace, and Peabody Awards, and the American Film Institute's Life Achievement Award.